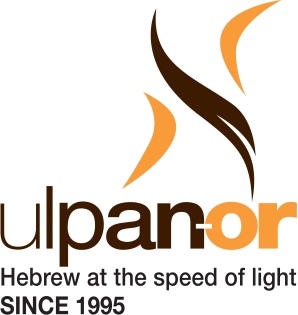 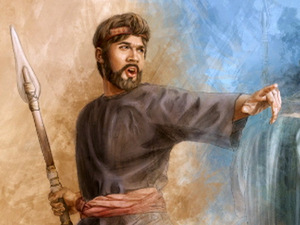 This Shabbat we will read from the Torah portion ‘Pinchas’.

Parts of this Torah portion are frequently read on Rosh Chodesh –  ראש חודש (New Moon) and various holidays, because it concludes with a detailed list of the daily offerings, and the additional offerings brought on Shabbat, The first of the month and the festivals of Passover, Shavuot, Rosh Hashanah, Yom Kippur, Sukkot and Shemini Atzeret.

In fact, a quick way to check if the Torah scroll is in good condition, instead of examining the whole scroll, one can turn to this portion to find out its particular condition, which would reflect the general condition of the entire scroll. 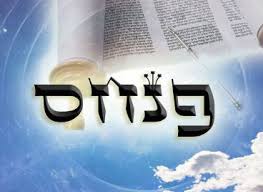 In this portion G‑d grants Pinchas, the grandson of Aharon, a covenant of peace and the priesthood for his act of zealotry in killing the Simeonite prince Zimri and the Midianite princess who was his paramour.

A census of the people of Israel between the ages of twenty and sixty counts 601,730men.

The five daughters of Tzelafchad petition Moses that they be granted the portion of the land belonging to their father, who died without sons and G‑d accepts their claim.

Moses empowers Joshua to succeed him to lead the people of Israel into the Land of Israel.

Let’s now take a look at the verse related to Pinchas being granted with the gift of peace.

(By the way, there is an opinion that the meaning of the name פינחס  is “mouth of brass” [brass as in the brazen serpent or the brazen altar, because the other way to write is פי-נחש)

The verse continues to explain that Pinchas and his descendents were appointed priests.

In this verse the Torah spells the word shalom – שלום with a broken (short) letter vav.

What is the significance of this?

Rav Zevin explains that a broken letter ‘vav’ intimates that the word in which it appears can be read as if it is absent.

The letters shin, lamed, mem with a vav, spell shalom.

The three letters without a vav spell shalem.

Both words, loosely translated as “peace” and “complete/whole” connote completeness, but there is a difference.

The word shalom with a vav describes the joining of two different people or objects.  This is symbolic of the letter vav (VAV in Hebrew means ‘hook‘) which is commonly used in grammar to join disparate items.

Even when joined each person or object retains its unique identity. They join together only to achieve a purpose. 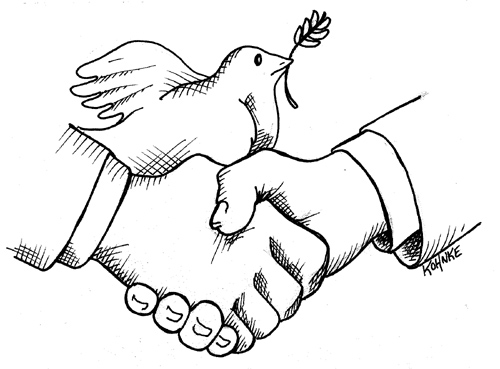 On the other hand, shalem without the vav connotes a greater degree of completeness. Here the two individual items completely unite with each one giving up their own identity to merge into one new complete unit. First, they follow in the way of the first kohen Aaron, who loved peace and brought peace between one man and another. They serve in the capacity of shalom with a vav.

When people join together they each retain their unique identity.

Second, the kohanim serve as teachers of the Torah. Here they bring harmony and completeness to the world through the Torah. In this capacity they serve as shalem without a vav.

Pinchas was rewarded with the blessing of shalom with the broken vav, alluding to the shalom with and without the vav. Pinchas and his descendants were to serve in the role of the priesthood that fulfilled both functions that are required of kohanim.

A scroll of Torah was once discovered in which the word שלום in the portion of Pinchas was written with a complete letter vav.

And not how it should be written:

The scroll was brought to a scribe to be fixed.

The scribe refused to fix the Torah by explaining that there is an opinion that holds that the word SHALOM is the name of
G-d and it is forbidden to erase even a small portion of His holy name.

The scroll of Torah was then brought to another scribe where the same scenario occurred.

Finally the problem was presented to Rav Sholmo Zalman Aurbach. He instructed the scribe to extend downward the letters shin, lamed and mem so that the vav in contrast would appear shorter.

At the bottom of the vav at the margin of the other extended letters a small dot should be added.

Such a procedure would give the vav its proper appearance.

Rav Aurbach’s brilliant solution was to fix the word by adding ink without erasing any part of the letter vav.

Many times one finds humself in a situation where the peace he has with others is less than ideal. He actually is then at a level of shalom (with a vav) while he would prefer the state of shalem (without a vav).

We are frequently convinced that the only way we can move up to next level is if the other party would desist from behavior or conduct that we find offensive.

We firmly believe that the only way to go from shalom to shalem is through erasure.

But, learning from the above story, the way to go from shalom to shalem is: expanding and growing instead of erasing and shrinking.