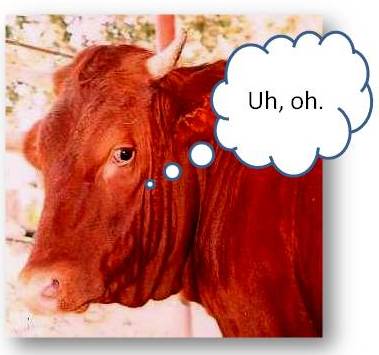 In this week’s Torah portion ‘Hukat‘ Moses is taught the laws of the red heifer, whose ashes purify a person who has been contaminated by contact with a dead body.

The passage of the red heifer is introduced by saying, “This is the statute of the Torah” (Numbers 19:2).

It is a bizarre and arcane ritual.  In Hebrew, this offering is called פרה אדומה  parah adumah, meaning “red cow” or “red heifer.” 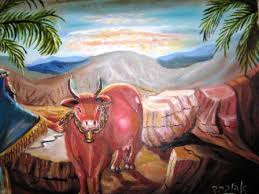 The priests slaughter and burn a completely red cow. They combine the ashes with water.

When a person is contaminated with impurity though contact with the dead, the priests sprinkle this water upon them, and the impurity is removed.

Yet those involved with the preparation of this water become impure.

While dating back to ancient philosophy, only recently have organizational scholars started to explore paradox.

Below is one of definitions of a paradox:

It is a statement or problem that either appears to produce two entirely contradictory (yet possible) outcomes, or provides proof for something that goes against what we intuitively expect.

Paradoxes have been a central part of philosophical thinking for centuries, and are always ready to challenge our interpretation of otherwise simple situations, turning what we might think to be true on its head and presenting us with provably plausible situations that are in fact just as provably impossible.

In our case the paradox is:

How the red heifer’s ashes mixed with water totally purify the person with the hardest impurity of all (contact with dead) on one end and yet “contaminate” those who prepare this “recipe” and they themselves become impure on the other.

How is it possible?

Even the wisest of all people, King Solomon could not resolve this riddle.

Our sages attribute its remoteness from King Solomon to that of the riddle of the Red Heifer.

This peculiar commandment is not merely an obscure and irrelevant detail of the Torah. In a way, it represents the essence of the Torah itself and reveals deep secrets about the ultimate redemption and the coming of Messiah.

The Talmud (m. Parah 3:5) teaches that only nine red heifers have been prepared in history:

The sages say that there were seven more from Ezra onward. Who prepared them?

This count brings us to a total of nine red heifers.

Maimonides (Rambam) comments with an unusual and uncharacteristic remarkable statement that Messiah himself will prepare the tenth red heifer:

Nine red heifers were prepared in keeping with this commandment until the destruction of the Second Temple.

Moses prepared the first one. Ezra prepared the second. There were seven between Ezra and the destruction of the Temple.

The tenth will be prepared by King Messiah; may he be revealed soon! Amen, let it be his will!

Maimonides suddenly breaks into prayers for Messiah to come in the middle of a halachic manual. It implies the important connection between this halachic commandment and the Messiah and emphasizes the anticipation that we should feel as we study this passage.

The red heifer is thus the most mysterious of all commandments.

When Messiah comes, mysteries will be revealed, as he teaches us the inner secrets of the Torah.

The red heifer alludes to the future time when the knowledge of God will be revealed to us.

Below are few Modern Hebrew expressions with this word.

Fot those of you who like riddles and paradoxes, here is one for you:

There is a very poor, quaint, little town where everyone is in a huge debt with someone but has no money to pay it back.

There is a hotel which is hardly seeing any business anymore. They are to soon shut it down. One day a very wealthy American guest shows up and wants to spend a night there. However, before he confirms, he asks for a tour of the hotel.

The receptionist asks for a security deposit which the American can take back in case he doesn’t like the rooms. The guest obliges.

It turns out by a matter of luck this is the exact amount that the hotel owed to the chef as salary for three months which they hadn’t been able to pay. They gave the cash to the chef.

The chef saw that this was the exact amount of cash he owed the grocer for months of groceries he hadn’t been able to pay for. He paid the grocer.

The grocer realized it was the exact amount he owed the doctor for treating his wife’s arthritis, so he paid the doctor. Then the doctor paid the money to the nurse for two months of service he couldn’t pay for.

The nurse was new to the town, so she had been staying in the hotel for a few days before she found a house to rent. She too was poor and couldn’t pay the hotel at that time.

The money she received from the doctor was exactly what she owed the hotel, so she paid.

Now the hotel had got back the exact amount it had paid the chef. Then the guest has finished his tour of the rooms, and it turns out he doesn’t like it.

He takes back his security deposit from the hotel and leaves, never to be seen again.

So everyone’s debt has been paid, but nothing is different from before. No one has earned anything.

But now everyone is happy even though the money has done nothing but to return to its first owner.

Therefore, this paradox is basically describing how nothing had changed from the start, but along the way, debts were paid, with no money.

Can you give an explanation to it?

Whishing you to resolve all annoying paradoxes in your life.