Which is The “True White”? This Shabbat we will read Torah Portion ויצא – “Vayetzeh” in the book of Genesis.

In our Torah portion Jacob has do deal with his father in law, Laban.

The traditional approach toward the character of Laban is that of being wicked.

He is referred as Laban the Aramean – לבן הארמי . Several interpreters suggest that his true nature is derived from the word הארמי  (The Aramean), which, using the same letters in a slightly different order could be easily read as הרמאי – The cheater.

The midrash dwells on the significance of his name, giving two diametrically opposed views regarding the following verse.

It says “‘Now Rebekah had a brother whose name was Laban.’

Rabbi Isaac says this was to his credit: meaning he was “purely white” – whitens and clarifies the law.

Rabbi Berachya said it was to his discredit: “purely wicked”– whitened in wickedness.

The two approaches, of course do not relate to the actual color of Laban’s skin, but interpret the white color as symbolic of his actions.

Let us see how these two positions, “white-hot in wickedness” and “one who whitens/clarifies the law” are reflected in the life and deeds of Laban.

Laban first appears in in connection with his seeing “the nose-ring and the bands on his sister’s arms”, when Eliezer was set by Abraham to find a wife for his son Isaak. 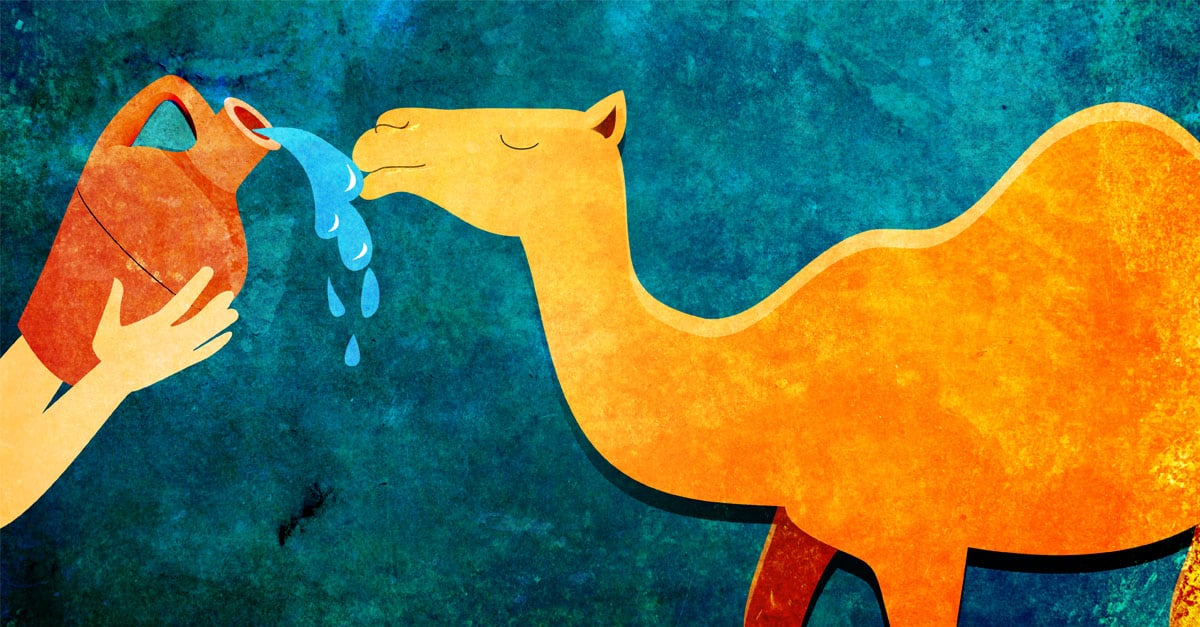 First the Torah tells how Laban “ran out to the man at the spring”.

Eliezer then, after seeing the gifts Rebekah received and after hearing her say, “Thus the man spoke to me,” the Torah says, “he went up to the man” (24:30).

Note the difference between the first ran
and the second went.

Went means that he slowed down and approached him at an easy gait.

Rabbi Meir Simcha of Dvinsk explains the change in gait as Laban approached Eliezer by the fact that at first “Laban believed Eliezer had come to take him as a husband for the daughter that had been born to him … and therefore he ran.

But, after looking closer and seeing the nose-ring and bracelets and hearing Rebekah’s report of what the man had said, he realized that Rebekah alone was the object of what he saw happening.

When he realized that Eliezer had only Rebekah in mind, to take her to be the bride of Abraham’s son, he approached the man more slowly.”

This explanation given by Rabbi Meir Simcha fills in some gaps in the plot.

In our Torah portion the basic plot recurs with similar details (29:10-17), only this time it was not Laban’s sister who ran home after meeting Eliezer, but his daughter Rachel after meeting Jacob.

This time, it seems, Laban understood the reason for Jacob’s visit.

Therefore, “on hearing the news of his sister’s son Jacob, Laban ran to greet him; he embraced him and kissed him, and took him into his house” (29:13).

However, unlike Rebekah who received many precious gifts from Eliezer, Rachel came home without any gifts whatsoever. And Laban, in the heat of excitement, apparently did not notice this, but hurried towards Jacob; and again he suffered painful disappointment.

Eliezer had come to Aram with ten laden camels, whereas Jacob came with nothing. With Eliezer, Laban was passive, but with Jacob he has taken initiative.

The Midrash dwells on the two ways that Jacob used to introduce himself to Rachel: on the one hand, “that he was her father’s kinsman [lit.: brother]” and on the other, “that he was Rebekah’s son”.

According to the Midrash, “That is to say, if Laban will act deceitfully, then he was ‘her father’s kinsman,’ i.e. Jacob could be just as deceitful, and if Laban were to act righteously, then ‘he was Rebekah’s son‘.”

From now on, the relationship between Jacob and Laban proceeds to develop on a formal basis.

In the first agreement between the two Jacob drafted a detailed contract with Laban in order not to be defrauded: “So he answered, ‘I will serve you seven years for your younger daughter Rachel‘” (29:18).

Jacob very specifically addressed Rachel, not to be deceived by Laban. Laban agreed to the contract without any reservations, but when his fraudulent act came to light he “whitewashed (Hebrew verb הלבין – HILBIN ) the case”: “It is not the practice in our place to marry off the younger before the older” (29:26).

Jacob’s contract was valid, but for the place Jacob came from; however it was not valid in Laban’s place.

Laban transformed his deceit to a “clearly elucidated (meluban) law” in terms of local legal practice. Jacob’s precautions did not suffice and Laban’s deceit had formal “cover”, leaving Jacob with the lower hand.

In the second agreement Jacob again set forth his conditions and Laban immediately agreed.

This time, however, the Jacob had the upped hand, “his brother in deceit”, and Laban, vanquished on his own turf, becomes irate.’

Looking for revenge, he was trapped and had to admit: “I have it in my power to do you harm; but the G-d of your father said to me last night, ‘Beware of attempting anything with Jacob, good or bad'” (31:29).

When we recite Pesach Haggadah, we say: “An Aramean wished to do away with my father” (Deut. 26:5).

Laban’s “interpretation/clarification (again using the same Hebrew root libun) of the law,” turned to be really just a cover/whitewash over his true nature of “purely wicked”.

Let us now dwell on several Hebrew expressions with the root לבן – white.

publicly insulted someone  (lit. made his face white) A Nation is Born

The Secrets of The Opening and The Ending