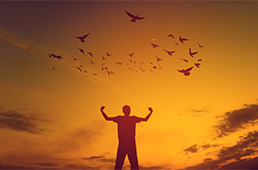 Today is the eve of the New Month of Adar.

Adar is the last month on the Jewish calendar, representing completion.

The Talmud tells us:

When Adar arrives, we increase our joy.

According to Kabballah, the letter “kuf” is connected to the month of Adar.

Letter “Kuf” – ק is the first letter of the word  קדוש “kadosh” which means holy.

The sages say that Adar is the best month to try to remove your personal barriers to holiness.

And Maimonides states that the holiness a person possesses makes him or her fitting to receive prophecy.

The sages state that prophecy can only come to someone who is happy.
Tradition says that some of the prophets used music to help put them in an elevated mood in order to experience prophecy.

Just as the prophet uses music to lighten his mood in order to access the spiritual world,
true happiness comes through using the pleasures of this world to elevate our consciousness in order to bind our thoughts to spirituality.

One of the most famous kabbalists who ever lived, the Holy Ari was once asked by his pupils how he reached such level of holiness.

“It is because of the intense joy I feel when I follow the Torah commandments”.

The astrological sign of the month of Adar is Pisces, the fish.
Fish are surrounded by water, which is a symbol for the wisdom of Torah.
A fish cannot survive on a sip of water; it must be engulfed by it.

Similarly, one should not be satisfied by just tasting spirituality, but should strive to be completely absorbed in it.

Adar is characterized by joy because it is the month of transforming dread into joy.

In two weeks we will celebrate Purim, which occurs in the middle of Adar.

As stated in the book of Esther, read on Purim, Adar was the month that Haman selected for grief and mourning.

But for the past 2,000+  years it has instead been a time of Jewish rejoicing and celebration.

Adar has the power to succeed against an opposing force, both on a national level as well as on an individual level.

If we look deep inside ourselves, we may find our worst internal foes, such as anger, confusion, pride, or jealousy.

Adar, is the month in which we may conquer those internal enemies.

By doing so, we will discover the source of life’s greatest joy.

Brain researcher Richard Davidson was one of the first people to study happiness. He discovered that happiness was not just a vague fuzzy feeling, but a physical state that could be deliberately induced.
Davidson found that people on the higher end of the happiness spectrum produce 50% more antibodies than the average flu shot, and significantly reduce their risk of cardiovascular diseases, pulmonary disease, diabetes, hypertension, colds and upper respiratory infections. If that’s not an argument to get happy, we don’t know what is.

Every Jewish month has its unique mystical power.

The power to succeed and to conquer our enemies through joy is the gift of Adar.

And our gift to you this time is “The Book of Esther” at a beginner-level Hebrew.

Here is the link:
https://www.ulpanor.com/ebooks/purim-1/beginner/

Wishing you a very joyous month of Adar,
Yoel & Orly

Seeing THROUGH, or Seeing IN...