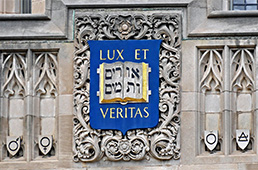 The holiday of Purim is already here, and till Sunday next week,
we will still offer special discounts on a variety of our online courses.

Don’t miss those out. Please reply to this email or contact us to take advantage of the last chance of these offers.

When one examines the emblems and the seals of two prestigious Ivy League universities, Yale and Harvard, a close similarity seems to show up.

An early 1643 Harvard sketch shows Veritas (Truth in Latin) drawn on three books inside the seal.

Nearly a century after Yale had selected its motto and added the word “Lux” – Lux et Veritas (Light and Truth).

However, in Yale’s emblem, the expression  Lux et Veritas appears on the outside.  Inside, there are two Hebrew words (written in Hebrew, using the Hebrew alphabet) on two opposite book pages.

A Yale diploma has long been a passport to opportunity, but it is challenging to explain the meaning of its stamp.

Dan Oren, in his “Joining The Club: A History of Jews and Yale” states:

Yale’s early leaders had spiritual aspirations for their college and saw themselves as American successors to the ancient Israelites.

But why would such a group of ardently Christian ministers have placed Hebrew words at the center of their corporate logo, and why the particular Latin accompaniment?

The two Hebrew words (Urim Ve’Thmmim) at the center of the official Yale seal make the connection to this week’s Torah portion תצווה – TETZAVEH.

The following verse in this Torah portion says:

And thou shalt put in the breastplate of judgment the Urim and the Thummim; and they shall be upon Aaron’s heart, when he goeth in before the LORD; and Aaron shall bear the judgment of the children of Israel upon his heart before the LORD continually. (Exodus 28:30)

These words אוּרִים וְתֻמִים appear eight times throughout the Bible.

These are oracular gems worn by the high priest Aaron. And their presence in Leviticus 8:8—the middle verse of the Pentateuch—suggests that they identify the book on the Yale seal as the Bible itself.

Harvard historian Samuel Eliot Morison conjectured that the common teaching of theologian William Ames at Yale and Harvard inspired both institutions in their search for appropriate language. Yet the answer for Harvard may not have been the solution for Yale, and the reasons must be sought in the theology of the day.

Now, let’s go back to the meaning of אורים ותמים

The root of אורים  is אור – ‘Light’, thus Latin ‘Lux‘ in Yale emblem

In fact, Torah commentators were challenged by the meaning of these words, as well as the function of what they represent.

According to most traditions, the Urim and Thummim were a piece of parchment with G‑d’s four-letter name written on it. Its function was to serve as an oracle, divining whether or not the Jewish people should take a certain course of action, and was to be used only by the king, the Jewish high court, or a person needed by the whole community such as a general.

When its services were needed, the High Priest would stand facing the Holy Ark with the questioner behind him. The individual desiring an answer would ask a simple yes-or-no question such as, “Shall we go to war?” The High Priest would meditate until he reached Divine inspiration.

Then, certain letters on the breastplate (upon which the names of the twelve tribes were written) would appear to protrude or light up, producing an answer.

Rashi, in his commentary, writes:

This is G‑d’s Ineffable Name, which was embedded within the folds of the breastplate. Through this medium, the High Priest enlightens (אורים) his words and perfects (תמים)  his words.

Because of the inscription of G‑d’s Name, the breast­plate was to as “[the breastplate of] judgment,” as it is written, “And he will enquire of him the judgment of the urim.”

According to Rashi the placement of the urim vetumim mentioned in this verse refers to the inscription of G‑d’s name on twelve precious stones mentioned earlier.

Maimonides interprets the term urim vetumim as referring to the stones of the breastplate themselves.

The difference in opinion between Rashi and the Maimonides concerning the definition of the urim vetumim leads to a vari­ance in the interpretation of a related Talmudic passage.

Our Sages state that when an inquiry was made of the urim vetumim, the High Priest wearing them “would direct his face to the Divine Presence.”

In his commentary, Rashi interprets this as meaning that the High Priest would gaze “at the urim vetumim, G‑d’s Ineffable Name which was embedded with the breast­plate.”

In today’s Modern Hebrew, the expression Urim Ve’Tumim refers to a source of ultimate knowledge or to a person who is The Expert (Oracle) in his field.

Wishing you and your loved ones – פורים שמח

Wishing you a very joyous month of Adar,
Yoel & Orly

Seeing THROUGH, or Seeing IN...