This Shabbat we will read the Torah Portion “Yitro” in the book of Exodus.

In this portion the Torah tells us that on the sixth day of the third month (Sivan), seven weeks after the Exodus, the entire nation of Israel – 600,000 people, assembles in the Sinai Desert at the foot of Mount Sinai to receive the ten commandments as part of the Torah. Rabbi Yaakov Abuchatzera explains that the word “Israel” can be read as an acronym:

meaning – “There are six hundred thousand letters in the Torah”.

(This is the tradition related to the total number of letters included in the five books of Torah).

Therefore, Israel did not leave Egypt until there were six hundred thousand of them, in order for each soul to be supported by one letter in the Torah.”

Hence each of the 600,000 souls from the Nation of Israel present at the giving of the Torah had a corresponding letter within the 600,000 letters included in the Torah.

Before the People of Israel received the Torah at Mt. Sinai, the Torah describes Israel as a synergetic body with the sum of its parts working in harmony.

“And they traveled from Rephidim and came upon the Sinai Desert, and they camped in the desert, and it camped there, Israel, opposite the mountain.“ (Ex. 19:2)

The famous commentator Rashi, notices a grammatical issue in the passage.

In the first part of the passage the plural “they” is used to describe the Nation setting up their camps.

But in the second part of the passage, when Israel camps opposite the mountain, the singular “it” is used.

Rashi addresses this issue by commenting that Israel at that point in the journey was:

“as one being, with one heart.”

The Torah must to be written with each and every letter in its proper place.

(If there is even a minute discrepancy, Torah scroll ceases to be “kosher”).

Similarly, each person can only reveal his full potential when individuals work together towards the greater good.

Thus the Torah teaches us that by being individually connected to a letter in it, each one of us can realize his/her unique virtues, traits and talents, and to use them toward the greater good of humanity.

It has the root חנ”י

Useful words in Modern Hebrew with this root are:

Listen now to a famous song written by Nathan Alterman:

The song was written in the period of the Independence war and describes building of a military camp in preparation for the war. It has deeper meanings and insights as only Alterman could put those together… 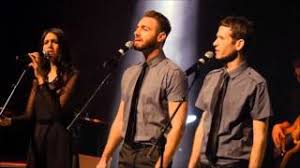 Below is the English translation of the song.

The Inner Power of Aleph

The Perfect Menorah vs. The Imperfect Chandelier