This Shabbat we will read the Torah Portion “T’rumah” in the book of Exodus.

In this Torah portion Moses is commanded to build a sanctuary:

And let them make Me a sanctuary, that I may dwell among them…

G-d then gives description of various articles to be placed in the tabernacle:

Probably out of all the articles, purpose of which more or less could be rationalized, the one that is very hard to understand its purpose is the table holding the showbread.

Maimonides in his book “Guide for the perplexed”, giving explanation for the tabernacle and its internal articles, actually admits that he has no clue to its purpose…

Let’s anyway try and understand what it is all about.

In Hebrew, the showbread is called לחם הפנים  LECHEM HAPANIM, which translates literally as “face bread.”

The Talmud says that it was called lechem hapanim because it had many “faces,” i.e., many sides.

As the tabernacle and all its articles were portable, the Showbread remained on the table at all times, even when the table was in motion carried by the children of Israel in the desert.

The Torah gives us more details about this commandment—how many loaves of bread there should be, their weight, and the day of the week on which they should be brought as an offering to the Creator:

Fresh loaves of bread replaced the old loaves on the table every Shabbat, and the Kohanim (priests) would eat the loaves that were removed from the table.

· The loaves were uniquely shaped, and they had to remain whole and unbroken during the baking and afterwards.

· The loaves were standing exposed to the air for a full week, and they must have been made according to a special recipe, because they never became moldy or dried out.

· The loaves had to be baked quickly so they wouldn’t become chametz (leavened).

The Talmud brings several opinions about the shape of the showbread.

Abarbanel suggests that the twelve breads might represent the twelve months of the year, showing how G-d provides for all the whole year long.

Alternatively, they stand for the twelve tribes of Israel who will be the recipients of G-d’s blessings.

Specialists were brought from Egypt, who knew how to bake, but they did not know how to take the loaves from the oven as well as the Garmus did, and in spite of their many attempts, their loaves became moldy.

The Garmus were summoned back to their job, and the showbread was once again offered. When they were asked why they wouldn’t teach anyone else how to do the work, they said, “We know that the Temple will be destroyed, and we are concerned that an unworthy man will learn how to bake the showbread and use it to serve an idol.”

Although, Maimonides could not provide an explanation for the Showbread, Kabballah does give us some clues.

It tells us that each article in the sanctuary represent parallel spiritual forces.

The showbread is a symbol for nourishment which is constantly supplied by the Creator in abundance. And, in order for the blessing to be present and materialize at all times, the Showbread had to be present constantly.

It therefore is the spiritual source of all the food mankind receives. Thus this “inner bread” is in fact the “Bread of All Bread”.

And the function of the table – שולחן (SHULKHAN) is derived from its root שלח (to send out), meaning that it sends out bread from its spiritual level of existence to the material world in its material form and shape.

According to the Jewish tradition, blessing can only occur when there is some material substance which could carry on the blessing, as in case of Prophet Elisha’s oil and Prophet Elijah’s flour.

There is a custom that any leftovers of bread should be present and covered during the meal grace so that the blessing could be carried out by those.

Speaking of the table (שולחן), in psalm 23 there is the verse:

You prepare a table before me in the presence of my enemies. 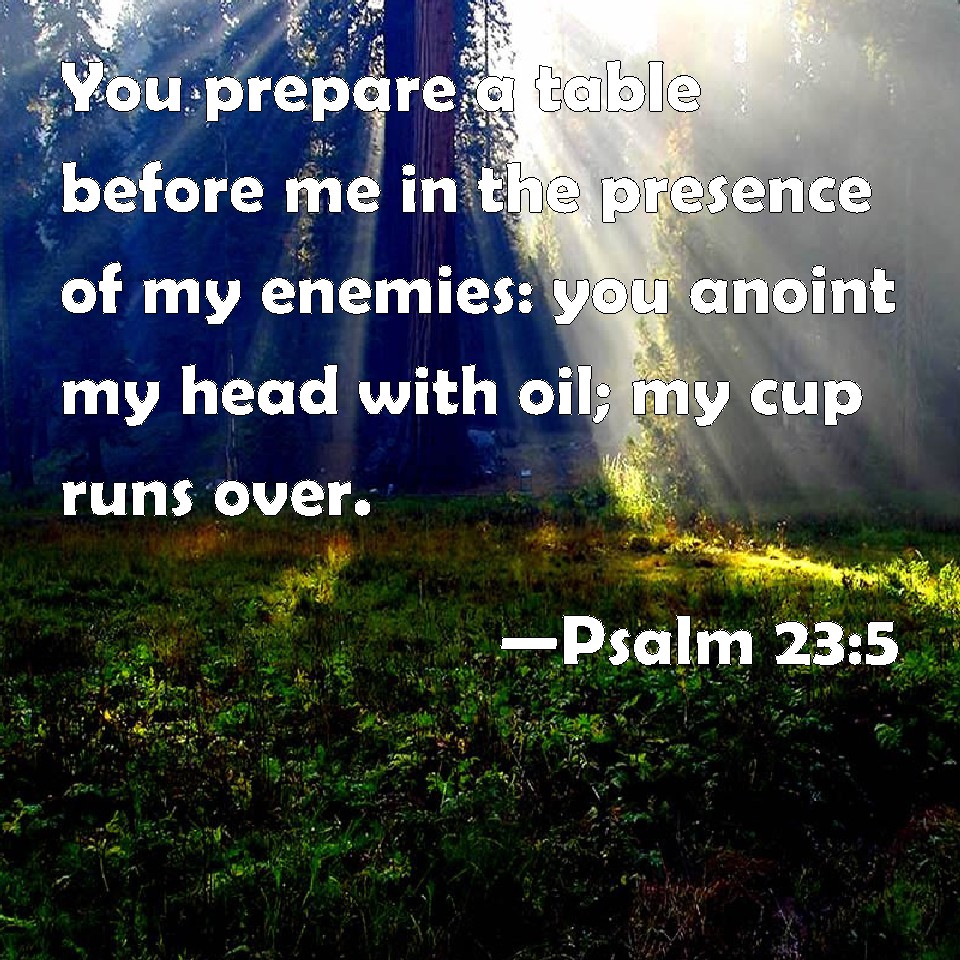 A psalm of David.

1 The LORD is my shepherd, I lack nothing.
2 He makes me lie down in green pastures, he leads me beside quiet waters,
3 He refreshes my soul. He guides me along the right paths for his name’s sake.
4 Even though I walk through the darkest valley, I will fear no evil, for you are with me; your rod and your staff, they comfort me.
5 You prepare a table before me in the presence of my enemies. You anoint my head with oil; my cup overflows.
6 Surely your goodness and love will follow me all the days of my life, and I will dwell in the house of the LORD forever.

Now listen to a nice version of this Psalm